We Are In A Season Where We May Need What We Don't Like! 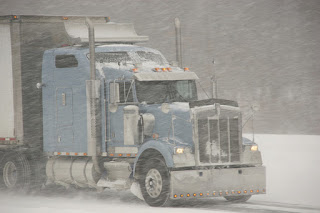 Have you experienced certain things in your life that you did not like at the time, but later realized were needed?

Recently I was driving through a dangerous snow storm going to Pittsburgh, PA to minister. I don't like snow storms, especially driving in them. Another thing I don't like is big eighteen wheeler trucks flying down the highways passing me by when I am driving. When they pass you by they can throw stones at your car and crack your windshield.

This snow storm was beating down hard but the roads were well-salted. But, my windshield solvent line had become frozen and my windshield became coated with salt making it almost impossible to see. The windshield wipers only made it worse. I felt dangerously blinded.Then all of a sudden I noticed something. Every time an eighteen wheeler passed by me and got ahead of me, it's tires would throw water up on my windshield and I could see. Because of the storm there weren't many trucks on the road so I began to pray for more trucks on my highway. "Lord, please send me more trucks." When I could faintly see a truck that was way ahead of me, I would speed up to catch up to it so it could throw water on my windshield. The trucks became my deliverance through the storm. I will never complain again about trucks on the highway.

Another time when I was driving in a snowstorm a huge truck ahead of me was going slower than I wanted. Although the roads were treacherous, I decided to take a risk and pass this humongous hindrance to make up for loss time. As I began to turn into the passing lane, I noticed a huge snow plow in front of the truck and it dawned on me I needed to be behind the plow or I might never get to where I was going. Again, what I didn't like, I needed.

Lord, "Why Has Our Troubles Come Upon Us Like An Avalanche Of Snow"?

Again, driving recently in another snow squall, I cried out to the Lord, "How could the Apostle Paul say that his and our many troubles are just a 'light' affliction compared to the glory that is to be revealed in us. ( 2 Corinthians 4:17 ) Was Paul crazy? Lord, show me what Paul meant and show me what my struggles and overwhelming problems look like to you. How do you see them from your point of view?" The Lord responded, "Son, look at just one of those snowflakes! You see it and then it's gone!" That is what all of your avalanche of troubles look like to Me in the eyes of eternity. They are as light and short-lived as the life of a snow flake. That is what I see."

Corrie Ten Boom, speaking at a conference, kept looking down as she spoke as if knitting something. Near the end of her teaching someone asked her why she was looking down and not paying much attention to the people. She held up a tapestry she was doing needle work on. Holding up the side that was frayed and hard to make sense of, she explained, "On this side of eternity our lives many times look like this." Then she turned the tapestry over and said, "But from God's eternal point of view, He sees something beautiful and good."

Lord, help us to understand that what appears to be a blizzard of problems is actually a treasury of snow.