How David's Small Tent Turned Into A Tabernacle Of Worship! 1 Samuel 17:54 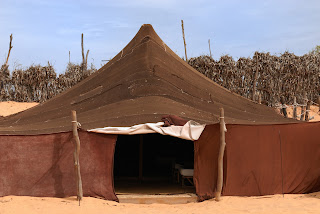 1 Samuel 17:54 After David slew Goliath the scripture says, "David took the head of the Philistine and brought it to Jerusalem, but put his armor in his 'tent'."

As we look at the armor of Goliath, I am persuaded to believe that David had to stretch out his tent a bit to hold it all.

Goliath was believed to be about ten feet tall, so quite a bit of armor was covering his body.1 Samuel 17:5-7. "And Goliath had a bronze helmet on his head ( remember Goliath had a big head ) and wore a coat of mail ( a flexible body armor made of small overlapping metal rings.) This coat weighing 5,000 shekels of bronze is believed to be about 125 lbs. Verse 6. He had a bronze skin armor on his legs and a bronze javelin ( a light spear for throwing ) across his shoulders. 7. And the shaft of his huge spear was like a weaver's beam ( approximately 3 inches in diameter ) with the spear's head weighing 600 shekels or about 15 lbs. And a shield bearer went before him. David probably took the bearer's shield also.


The Trophies Inside David's Tent Created The Atmosphere Of Worship!
With all of Goliath's armor in David's tent he would never forget what the Lord had done for him and the nation of Israel. What I am about to express is my creative opinion and is not a difinite word from God. But would you stretch your imagination with me to see what else may have been in David's tent causing it to be stretched into a tabernacle of thanksgiving and praise? Besides Goliath's armor, I believe there were other trophies. Memories of the legacy of Israel's past history of crossing that Jordan river overflowing all of it's banks lingered in his tent. ( Joshua 3:7 ) The testimony of those 'stones of remembrance' was commanded by the Lord to be handed down through Israel's generations. ( Joshua 4:7 ) David heard about those 'stones of remembrance' from his father. I believe that is why when David went to face Goliath, he got to thinking, 'I'd better find me some stones." So he went to a brook.
Picking up that first stone, he relived that miracle crossing of Jordan and his faith began to rise. Picking up the second stone, he remembered that bear.That bear was gone except for the bear skin rug. Reaching for the third stone, he remembered that beautiful lion rug on the floor of his tent. In the evening David would often lean back in his 'bear' chair and rub his bare feet over the back of that lion's fur. What came to take him out was so sweet under his feet! Gripping that fourth stone, he remembered, Goliath had a brother with three sons. He thought to himself, "I'd better make that five stones in case the family shows up! And as he picked up that fifth stone, he saw Goliath's name written all over it and a shouting spell broke over him, "I feel a giant killing anointing coming down all over me, Saul, let me go kill him!" It was 'faith gone wild!" I believe the four stones that David didn't have to use were kept in his tent also.
It seems reasonable to believe that David had to keep stretching the curtains of his dwelling place and lengthening his tent stakes to hold all the weapons and trophies the Lord was giving him through his enemies. David's tent became a tabernacle of ongoing praise and worship making him a full-time worshipper, part-time shepherd! Even in times of discouragement, his past victories caused him to 'believe to see the goodness of the Lord in the land of the living."
The Greatest Trophy In David's Tent
Last but not least, I believe David's biggest trophy in his tent that created such an atmosphere of violent worship was himself. It flowed out of him from knowing he was God's trophy of grace. Even later with David's failure with Bethsheba, knowing he was a great sinner, he knew he had a great saviour!
The Greatest Weapon In David's Armor
'Remembering' was perhaps the most powerful weapon David had as his armor. His remembrance made him a giant killer.
'Remembering' is perhaps a nation's most powerful weapon against her enemies. When a nation remembers her past God given victories, she rises again becoming unstoppable. Even remembering our past tragedies such as 9/11 brings forth a unity and resilence in our nation to overcome our next impossible odds.
Blessings,
Bill Yount
http://www.billyount.com
Posted by Bill Yount at 8:04 PM