Waves Of Salvation Are Coming In 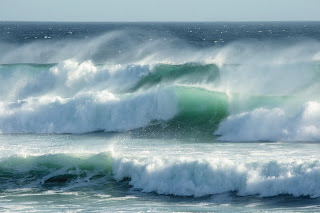 It was wave after wave after wave. These waves were bringing in the lost. I mean lost, lost! These waves were bringing the lost up out of the lowest places of the earth. It seemed as though the sea was giving up her dead, as though these souls were coming up from the pit itself. There were pornographic stars, mass murderers, witches, many from occult and Eastern religions. Souls that had committed horrendous indescribable crimes. It was as though Hell itself was vomiting up these souls. Hell was letting go of them. The gates of Hell were opening and these souls were being released! These last waves had the power to bring up the very bottom of the ocean.

As these waves kept coming in, the waves of salvation began covering more and more of the shore and coming upon the earth. Like a flood, the Spirit was coming in, lifting His standard upon the earth itself and multitudes were being saved as the waves of salvation continued to literally cover the earth. As these waves increased in magnitude and became humongous tidal waves, the Lord said, "Truly as I live, all the earth shall be filled with the Glory of the Lord like the waters cover the sea."