Rodeo Angels Are Being Released...'Tis The Season To Ride Broncos And Bulls!'

God's words often have a kairos moment to them and yet the Holy Spirit at times brings a word to our remembrance as though there is another season for it to be accomplished in His people. Especially in a time when so many are facing a season of overcoming the 'agony of defeat' and discouragement. Such is the case I believe with this word that was posted in 2005. 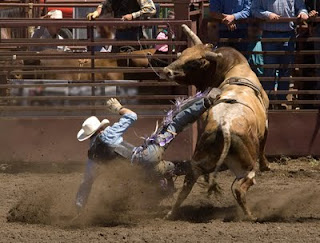 Rodeo Angels Are Being Released...'Tis The Season To Ride Broncos And Bulls!'
Have you ever watched a rodeo where the rider straddles himself onto the wild bull? They are both momentarily held inside close quarters, as the bull furiously dreads the rider's presence on his back. They both anxiously await the rodeo gate to open. The bull's destiny is to throw the rider off and then stomp him to death! The rider's dream is to outride the bull's fury!

In the Spirit I saw a huge rodeo arena as the grandstands were filling up with God's people. Many had come to fulfill their deepest desire for thrills, spills, and adventure by watching someone who was willing to risk their life to overcome what seemed like insurmountable opposition. Dreams and visions of being down on the field themselves had faded long ago by injuries, defeats, and being stomped into the dirt never to feel wild at heart again.

"I Am Shaking The Grandstands To Shake My People Onto The Field Of Their Dreams!"

I then saw the grandstands begin to shake so violently that God's people suddenly knew it was safer down on the field than where they were standing. As the shaking continued there was no place left to stand. It was like a huge altar call as they came running down onto the field of adventure, where miracles and wonders were born.

Many in the Body of Christ trembled at the rhema "now" word as a "Rodeo Angel" proclaimed, "It's time to grab the bull by the horns . . . It's time to get back on your bull that threw you off!"

Many who had been thrown off course of their God-given dreams and visions by wild, furious circumstances and situations stomping on them were now seeing and sensing the presence of 'rodeo' angels now with them, strengthening them to do all things through Christ . . . even riding broncos and bulls!

"Fear Not...You Are About To Ride With The One Who Rides A 'White' Horse . . . His Name Is Faithful And True To You!"

I then began to see many in the Body of Christ straddling wild broncos and bulls, fenced in by tight perimeters, but now couldn't wait for their rodeo gate to open. I then heard a Rodeo Angel proclaim, "Hold on, you are in for the ride of your life . . . you will now ride with the One who rides a 'white' horse!"

I then saw this arena filling up with Rodeo Angels and a great cloud of witnesses standing in the grandstands of glory cheering God's people on to overcome great odds that were stacked against them. I sensed one Rodeo Angel saying to another, "Heavenly 'Super Bowls' are coming to earth for God's people. By facing their fears many will overcome the agony of defeat and will accomplish great exploits, as the world fills up the grandstands to watch the Glory of God come upon them."

"Super Bowls of Praise and Worship" will begin to fill arenas and stadiums. I saw angels being sent to cities proclaiming, "Think bigger, your stadiums look like thimbles compared to the glory of the Lord coming upon the earth."

I am reminded the people who get their face on Wheatie boxes often get up one more time than they fall done. Only then are many known as champions.