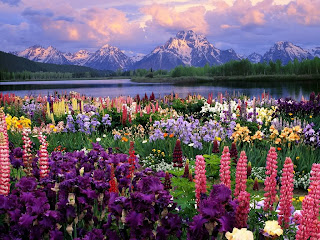 John 12:24 "Verily, Verily, I say unto you except a corn of wheat fall into the ground and dies, it abides alone; but if it dies it will bring forth much fruit."

To germinate means 'to begin to or cause to grow, or sprout.

IT'S AS THOUGH THESE SEEDS WERE SHOUTING...."OUR SEASON OF DEATH IS OVER!"

In the Spirit I am hearing a sound I have never heard before. It's a sound from seeds that God had planted through us that have died inside the stony hearts of many people. There had been a long season when these seeds were not heard from at all. They were silenced by death. But in spite of death these seeds now were beginning to groan as though death itself could not keep them any longer. The very life of Christ within these seeds was now beginning to overcome death and I saw a sprouting taking place that seemed to begin to shake the gates of hell off of its hinges! It's as though these seeds were shouting, "Our season of death is over! Hallelujah, we are now coming alive!" Seeds that had died with unfulfilled dreams of God inside of them were now beginning to come alive worshiping their Creator as they were beginning to sprout, bringing forth 'fields of dreams' coming true!

Seeds that were planted many years ago up to this present day were beginning to germinate. Seeds we had sown of the word of God, acts of kindness and even smiles were bringing in a harvest as germination was taking place inside of many of whom we had forgotten about and given up hope for.

IN THE TIME OF HARVEST KEEP SOWING SEEDS!

Ecclesiastes 11:4-6 "He that observes the wind shall not sow and he that regards the clouds shall not reap. 5. As thou knowest not what is the way of the Spirit, nor how the bones do grow in the womb of her that is with child; even so thou knowest not the works of God who maketh all. 6. In the morning sow thy seed and in the evening withhold not thine hand; for thou knowest not which shall prosper either this or that or whether they shall be alike good."

Both of our daughters are expecting our first grandchildren a month apart this year. Both are having boys! We have been saturated with sonograms. Sonograms are amazing to look at. You begin by seeing something so small at first and then the little members of the body begin to grow. We can't figure out how that happens but it's the seed that makes it all happen! I believe this year will be a year of record breaking germination taking place in the wombs of many women....even a year of surprise babies!

MANY THINGS THAT HAVE BEEN 'TERMINATED' WILL BE 'GERMINATED' THIS COMING YEAR!

When a seed falls into the ground and dies it looks different as it begins to sprout and surface. Many ministries, jobs and dreams that have seemingly been terminated will begin to germinate and spring forth suddenly appearing different with new dimensions this coming year. The enemy is not cutting anything away from you but God is pruning us all to look to Him for everything. Don't focus on your dead dream, dead job or dead ministry...listen to that seed that is now groaning to come forth in newness of life. Some jobs that have been terminated in one place will germinate in another place. Your gift will make room for you. Your gift has outgrown the room you were in! You will now need a larger room for your gift. The place where you get pregnant with God's dream is not always the same place where you give birth to it.

GERMINATION IS TAKING PLACE ON THE INSIDE OF YOU RIGHT NOW!

Many seeds that have been planted inside of us by the Holy Spirit and have seemingly died forever are now beginning to make a noise and groan. Even things that we 'thought' God told us that that is over.. isn't. Twenty-five years ago I had co-written a song with a brother that was recorded by several people and blessed many. After several years the song seemed to have finished it's course of being heard. Once in a while I would type in the name of the song to see if it's season was really over. I became convinced that the song had a certain season and that was it. Just two months ago I typed in the name of the song on i-tunes store and up came that song "It's all taken care of, thanks to you." just recorded by Claudelle Clarke, the queen of Reggae Gospel Music from Jamaica who has been singing for forty years now.

I contacted her and since the publishing company I had signed with closed down fifteen years ago, she was unable to find the authors of the song.  Sometimes when our name is overlooked or forgotten, God often uses a seed we planted to cause others to reap blessings where they did not sow and to take it further than we ever could. 1 Corinthians 2:6 Paul says, "I have planted, Apollos watered, but God gave the increase."

Galations 6:9 "And let us not become weary in well doing for in due season we shall reap if we faint not."

I am learning that it's when I feel like fainting that that is when I am actually doing well from God's point of view and that a seed that I have sown is beginning to groan and sprout somewhere in some place or in somebody or in some nation!


We love and appreciate you all,