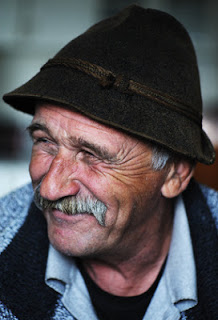 We called him Uncle Willie. A little old man who sat near the front of the church so he could hear the worship and the message. At times the Spirit of the Lord would come upon Uncle Willie causing his frail body to shake and his eyes to weep. Uncle Willie's glass eye intrigued everyone. I'm convinced some came to church just to see it. When He began to shake and weep, his glass eye would often pop out, and if you watched closely, you could see him catching it in his hands. He'd then tilt his head back as though nothing unusual had happened and roll the glass eye back into place.

I soon discovered Uncle Willie could see better than any of us. It happened when a young boy drowned in our hometown river. The river was drug for days without closure for the grieving family. Uncle Willie mentioned to someone, "I know where that body is, I can see it in the bottom of that river." Word got to the parents and spread quickly to the rescue team. They helped Uncle Willie into a boat and started moving out on the water. Willie's crackling voice steered the rescue team in spite of the boat filling up with doubt. Finally, further down stream, Willie pointed, "the body is right down there."

The doubtful crew threw the weighted hook, and sure enough, it hooked the little boy's body.

A tainted, saddened cry of relief and wonderment was heard by those on shore, including the parents.

With this heart cry I began to expect to hear and see people like I have never seen them before. I have seen too many people as trees walking and now I expect to see each one clearly. To my surprise it is happening. This morning I stopped by a branch of my bank that I rarely stop at. I usually use the drive through but today I felt impressed to go inside. When I looked at the young male teller I heard the word 'promotion' and had a witness in my Spirit. I played it safe and asked him a question. "Does your job allow you to climb up the ladder?" He said, "Yes." I said to him, "I sense you are going to be promoted on your job." Looking surprised, he responded, "I am getting a promotion next month!" I told him I sensed the Lord telling me that His hand was on his life and He knew where he was. "Your promotion is coming from the Lord," I said. As I walked out of that bank I said to the Lord, "This is fun! Serious fun. Who's next?"

Lord, forgive us for having eyes to see but not seeing and ears to hear and not hearing.